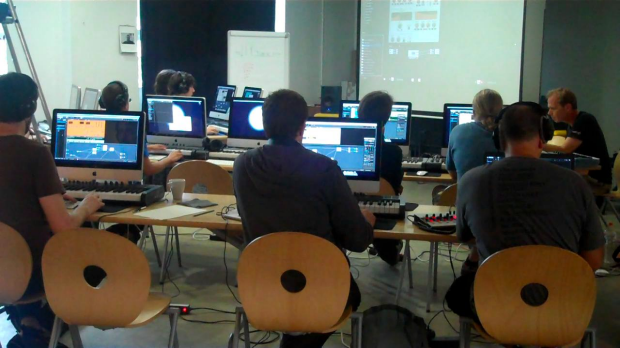 The first big brain audio workshop has now come and gone and we are preparing for the second Reaktor Intensive course at the end of the month. It has taken me a few days to digest the richness of this past weekend. From what I have heard from the 12 participants, there is a high level of satisfaction for the weekend course.

An unforgettable highlight for me was Stephan Schmitt’s teaching. He introduced the new Modal Bank and Sine Bank modules that are in the Reaktor 5.5 update. But more than that, he astounded us with the musical potential of modal synthesis and additive synthesis with his own instruments. He showed us a new synth creation of his which is unbelievably expressive.

Only recently did I come to understand Stephan’s drive for creating this kind of instrument. Not long ago, he confessed to me that as a keyboard musician, he was always in awe — if not also a bit jealous — of guitarists with their incredibly expressive feedback and distortion possibilities. The fact that playing one single note could generate a whole wall (or universe!) of sound often made him wish that he could do the same with a synth.

This is exactly what Stephan’s new creation can do. Amazing. To me it’s proof that to make a great instrument, you need not only brilliant engineering, but you also need musical passion. This was clear in Stephan’s teaching and playing at the workshop. I am deeply thankful that he took the time to come and share his knowledge and insight with us. I’m sure that I was not the only one who walked away feeling energized and inspired.

Another thing that struck me was that a strong interest in Reaktor managed to unite 12 people who are so different. From graphic ninjas to theater and film music composers, from developers to hobby producers — the participants brought a vast range of interests and experience.

And yes, “beginning-intermediate” can be a little wide, and there was certainly a range of levels, but I think everyone managed to get a lot out of the course. Starting the course with subtractive synthesis in Reaktor gave everyone a common base for the rest of the weekend. The same LFO macro you build for the subtractive synth can be used for the Start position input of your Grain Cloud module mangler later in the day. And of course, the same goes for filters and envelopes and control layouts on the panel.

The amazing thing is giving 12 people essentially the same piece of work to do and getting 12 different instruments, 12 different ways of performing, and 12 different ways of conceiving of sound. One of the participants is an OSC freak (I hope he doesn’t mind me putting it that way; I should say: “expert” or even “genius”!) and he was controlling his Reaktor construction by shaking, tilting, and turning his iPhone, which transmitted the control data right into his Reaktor instrument. Very cool!

Finally — and this is no minor point — a workshop like this one is about networking. It’s about people meeting each other, exchanging ideas, and, in some cases, talking about doing projects together in the future.

Thinking about this human network made me think about a Reaktor instrument. At the beginning, you might have a bunch of powerful modules and macros, but nothing wired together. That was the situation with the workshop participants on Saturday morning. After two days, on Sunday evening, we were sitting out on the terrace of a neighboring bar, having beer into the early morning hours. I think then we could all better be described as a fully wired Reaktor structure, with connections going all over the place, exchanging email addresses, ideas, concepts, passions; talking about politics, electronic music, theater, and, of course, Reaktor.