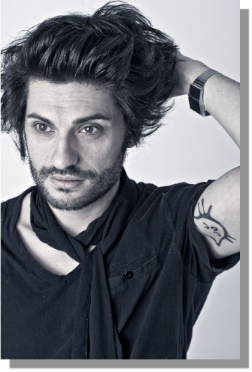 Since his childhood he has been in love with music, playing with cassettes and old Bontempi organs. Attempting to learn a large number of instruments, he discovered both the ease and potential of recording and making music with computers.

Since then the computer has become his instrument on stage and in the studio, especially after discovering Ableton Live (version 1.3 at the time) as the perfect tool to “play” with.

He spent many years in Barcelona where, in spite of a degree in Economics, he graduated in Sound Engineering and lectured at the “Electronic Music Producer” course at SAE Barcelona and at the “Music technology” course at Conservatori de Musica Superior del Liceu. He also worked as recording engineer at Nomada Studios and Cristian Vogel’s Studio57, while getting more and more known in the dance producers scene as the geek expert.

He now lives and works in Amsterdam, where he continues his hyperactive existence in the audio world.

He is part of the creative collective Hello, Savants! as composer and sound designer for multimedia with clients such as Nike, Nokia, Coca-Cola and Heineken and works as music technology consultant. His clients include studios (Kensaltown Studios), DJs and producers (Dubfire), schools (SAE Institute), as well as broadcast and radio (Red Bull Music Academy Radio).

Cristiano is involved in producing promising and talented new artists as well as his own music. Currently one of the two members of Plastik Joy, a project released worldwide by the US indie label n5MD, completely recorded, composed and mixed with Ableton Live.

Most recently, he recently founded the Ableton Training Center helloLIVE, a unique concept of pop-up school focused on one-day, hands-on workshops with a distinguished approach for teaching Ableton Live.

Cristiano is an Ableton Certified Trainer and officially qualified to teach Ableton Live 9.