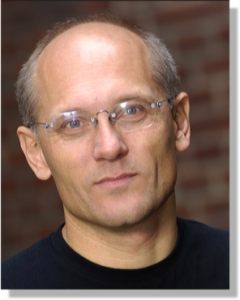 Stephan Schmitt began working on Reaktor (originally called Generator) in a small home office in Berlin back in 1994. His vision: to transform standard computers into musical instruments and to empower musicians to access the full potential of sound synthesis and signal processing.

As an active keyboarder and live musician, Stephan had been looking to escape the limitations inherent in expensive and relatively inflexible hardware synthesizers.

With a hardware engineering background, he developed mixing desks before making the jump into the virtual world of software instruments and founding Native Instruments. The company is now an incontestable world-leading creator of software intruments and effects, DJ products, Guitar effects, and extensive sound libraries.

Stephan’s work on Reaktor has been continuous since those early pioneer days. Recently, he has developed the advanced Reaktor synthesizers Spark, CHA-OSC, and the highly-acclaimed Reaktor Prism and Prism FX. His latest Reaktor instrument is the highly-popular sample scanning instrument, Skanner, made available at the end of 2011 to registered Reaktor users. His dedication to the Reaktor vision and to the Reaktor community is stronger than ever.

In November of 2011, Stephan created Nonlinear Labs a new company dedicated to high-end instruments for live musicians. Read more about Nonlinear Labs in this interview.